In Convergence Of Bad News, Forecaster Predicts CAD Dollar To Be Worth A Barrel of Oil By Year’s End 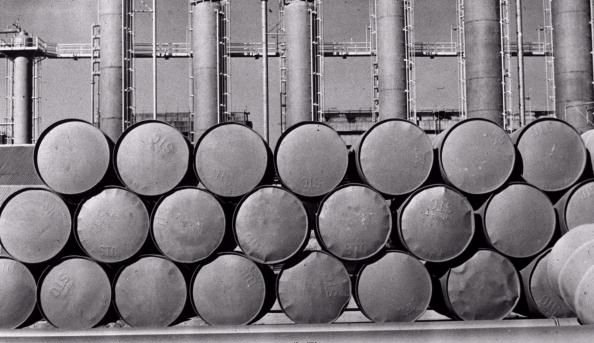 “The good news is one Canadian dollar is going to buy you a lot of oil by the end of this calendar year.” Says Jim Clancy, head of dire for the Bank of Saskatoon, “The bad news is that oil won’t be worth shit.”

At an at times unruly press conference in which Mr. Clancy had to shout to be heard over the sound of people cancelling travel plans, the announcement was preceded by theatrics – uncommon at such an event – when 2 barrels of oil were wheeled into the centre of the room. Clancy gestured dismissively at them and said, “So that’s how much a cup of coffee is going to cost soon.”

“Essentially we’re selling ice in the winter. And nobody’s buying. Because they have their own ice, or maybe they are sick of winter.” Clancy expounded, oddly in response to a reporter questioning the propriety of the him (Mr. Clancy) smoking inside, a question he did not return to.

In response to the BS (Bank of Saskatoon) analyst’s statement, a spokesperson for the Bank of Canada said that it seemed far-fetched, but added that, “He was the only forecaster to successfully predict the effect the falling dollar would have on the migration patterns of Canadian geese.”

One such goose was quick to confirm this. “Even with discounts and using air miles, it’s just not worth the flight,” The large bird said, kicking at the snow in a park on the frozen edges of Lake Ontario, just west of downtown Toronto. “By the time we get there we can’t have any fun, it’s all too expensive. Not to mention the price of just getting a meal,” Loud honking, “Don’t get me started. No, we’re staying home this winter and will just have to make the best of it.”

The positive spin that Clancy was able to muster was that at least Canadians can expect to be able to afford a great deal of oil; if not much else.

“It’s crude so there isn’t a whole lot your average Canadian is going to be able to do with it out of the barrel of course, but leave it in the container and it gets downright useful.” His gaze rose hopefully to the back of the room as he listed the possibilities. “My expectation is by this time next year we will likely see new homes being constructed out of barrels of oil. Fences, highway dividers, and playground equipment are obvious applications as well. I wouldn’t be surprised to see children making large toys out of them, and their parents beginning to ride them to work.” He paused here to take a question from the back, “Yes, I’m still talking about barrels of oil. You’ll see. By the end of this year.” A dire prediction with a black lining.