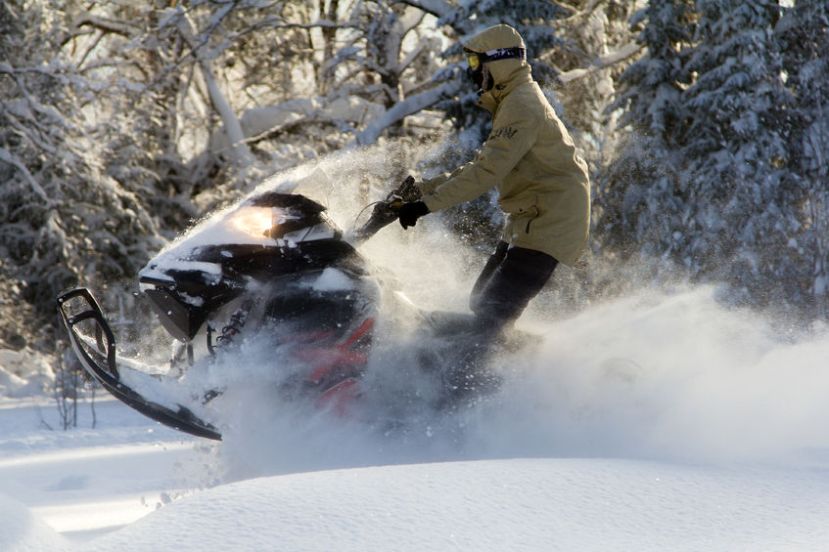 “When you come to a stop in a clearing in the middle of the forrest, and you turn your engine off and are surrounded by absolute and complete silence, having scared the shit out of every living thing for 15 kilometres back down the trail, I tell you,” Says Jim McEwan, head of Ontario Winter Warriors, a non-profit organization of snowmobilers, “You really feel a true bondage with nature.”

Out for a burn through the wilderness recently McEwan quickly rattled off seven reasons he loves snowmobiling, counting them out on gloved hands that perfectly match his full body snowsuit, helmet, goggles and key chain (Lime green with white piping.

Not everyone appreciates this seasonal exuberance as expressed through loud machines. Surveys of local raccoon populations across the province have routinely found their number one hate to be the annual influx of these vehicles to their otherwise peaceful habitats, and the same animals report that if they had one wish it would be for opposable thumbs with which to accurately fire upon the colour-coordinated invaders.

“Oh my Great Bear,” Exclaims Robbie the raccoon. “I just don’t get it. Who looks out on an unbroken expanse of pristine snow, unsullied by human interference, perhaps even with a sign that says: Thin Ice, Don’t Be A Dumb Shit, and thinks, ‘Grip it and rip it baby.’ Can’t you just go for a hike?”

“You interviewed a raccoon?” Was Jim McEwan’s initial response when asked his thoughts regarding these concerns. “Who the hell is Robbie the Raccoon? Well, what evs, hater’s gonna hate. Snowmobiling in Canada is a historic pastime, one that employs thousands of people. It’s here to stay. Did you know there are places in this country that can only be accessed by snowmobile half the year?” Though he goes on to admit he hasn’t been to any of those places and generally just unloads his ski at the local conservation centre before speeding to the outer lakes to watch people driving their machines across open water gaps in the ice.

“I don’t always do it myself. Shoot the gaps in the ice that is. I’ve seen a few skis go straight to the bottom and that’s downright embarrassing. Usually it takes me a few drinks to get up the nerve.” He explains, pulling out a hip flask. An engraving on it reads: Eat my flakes.