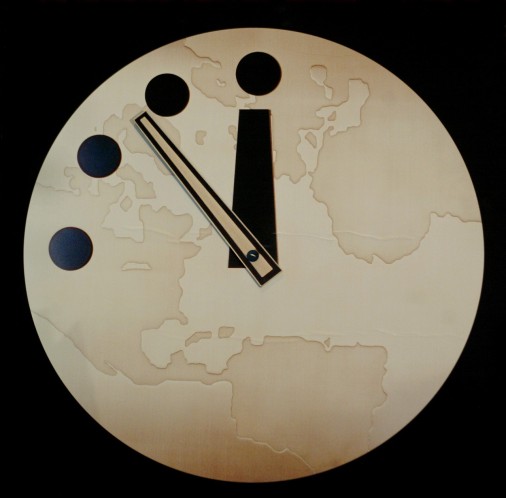 An Out And Abouter special investigation has revealed that on the night of the U.S. federal election, shortly after 3:00 AM EST, as Donald Trump was riding Jared Kushner’s shoulders  around his campaign headquarter singing ACDC’s ‘Dirty Deeds Done Dirt Cheap,’ the caretaker in charge of maintaining the infamous Doomsday Clock quietly removed its power source.

“I was doing my usual hourly rounds, checking the locks, adjusting the thermostat, measuring the hands of the clock with a protractor to make sure nothing had changed. Y’know, the usual.” Jimmy Butler, head of Doomsday Maintenance, revealed in an exclusive interview. “When I heard a whirring sound coming from the direction of the Doomsday Clock. It happened at the exact same time my phone began lighting up with news alerts, saying our country had elected the political version of a whoopee cushion. As I looked up from my phone I saw that the clock hands were beginning to turn. So I acted. And pulled the goddamn batteries out.”

While admitting to feeling conflicted about not letting the clock move to its desired hour (estimated by some experts to be well past 6 AM on Armegeddon) Jimmy says if he had to, he would do the same thing again.

“I have grandkids you know. And they’re scared. The last thing they need are photos of some minimalist, oversized clock face all over the news confirming their worst fears. That Trump isn’t just a Don, he’s ‘the dawn.’ Of the end of this whole shit show. Now if you’ll excuse me I have a little bit of dusting, and a whole lot of pretending, to do.”