With Canada Being A Drag, Trudeau Considers Seeing Other Countries. 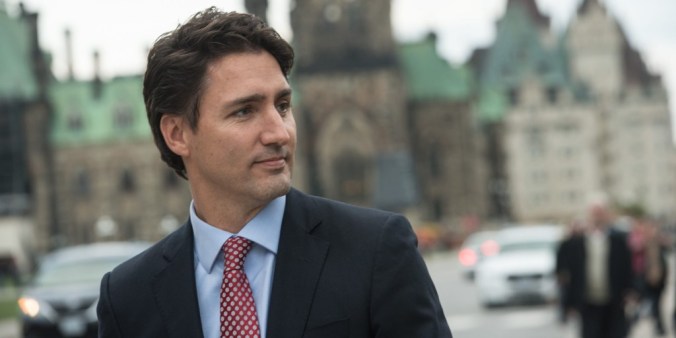 Trudeau and Canada are seated at a table at Blink, the popular Calgary restaurant, and possible subconscious allusion to the speed with which the fortunes of a Prime Minister can change. The location was Canada’s choice.

She (Canada) is looking stunning in a red dress, Hudson’s Bay shawl, and shit-kicking boots. While somewhat pale from a grey winter without a Cuban getaway, and more than a little uncomfortable with Donald Trump making eyes from a large table to the south, she appears poised, while maintaining a bristle of aloofness towards Justin.

“Let’s order some wine.” Trudeau offers, attempting to break a silence that has prevailed since they sat down.

“From where? Niagara or BC? Or wait, I remember, you only drink vintage bottles given to you by the Aga Kahn.”

“Canada. Please. Let’s just have a nice meal. Like we used to.” Trudeau says, looking pained as the waiter appears beside them.

“Where are you from?” Canada asks the waiter, taking the young man by surprise as he places an amuse-bouche in front of the pair. The young man replies he’s from Newfoundland, and quickly adds that he’s given them mountain oysters, cautions that they are still hot, and warns that it would lose most of the Albertan vote to refuse the delicacy.

“Bet you came here for oil work,” Canada replies, before the server has a chance to take their drinks order. “Bet you got laid-off. Bet you’re now deep in debt, not saving for your retirement, and stuck serving tables to pay for your truck. Am I close?”

“Well, its a Subaru, but other than that…”

“Thank this guy.” Canada gestures with her butter knife at Trudeau who has slid down in his seat. He smiles wanly at the waiter, asks what they have in bourbon, orders three fingers of Buffalo Trace, and legs it to the bathroom. On the way he bumps into Sweden, who has clearly been working out.

“Hi Justin,” Sweden says softly. “I hear you’ve been getting some grief on the home front. Can’t be easy. Remember at the convention? Yes, the U.N. one, don’t act coy. You know I appreciate you. I’ve gotta run, but remember, it’s been a few years since a sitting Prime Minister visited me. Or a lying one for that matter.”