Kellie Leitch Offended That Many Are Describing Her Small, Quacking, Waterfowl As Ducks 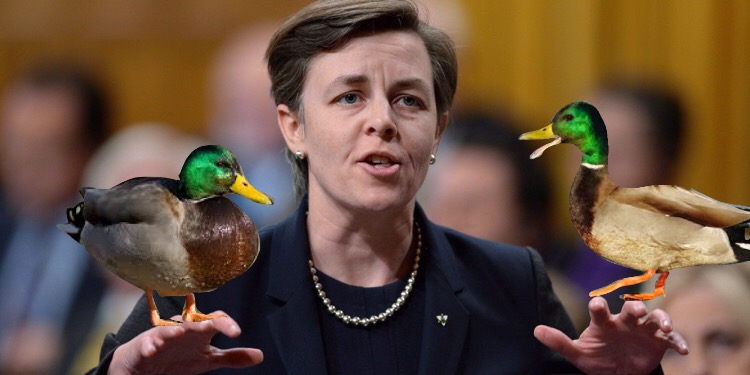 “Look,” Kellie Leitch says, starting to sound exasperated, and continuing to sound like she is speaking through a kazoo, “I can’t control what lands on my pond, the banks of which are sprinkled with a variety of seeds and which I visit daily to throw bread crumbs in.”

The CPC leadership hopeful then went on to decry the widely-reported notion that her large following of web-footed avians – the males of which display a green head and yellow bill, and refer to themselves as mallards or drakes – are necessarily ducks.

“Frankly, many of my winged supporters are getting tired of having to defend themselves from this egregious allegation. Just because they walk and talk in a particular manner, and are frequenters of my not-a-duck pond, and have a flat bill well-suited for bottom-feeding, does not at all mean that they are ducks. And we are all a little sick of having to defend this willful mischaracterization to a public who seem obsessed with correctly labelling things like ‘ducks,’ and ‘racists’ right now. And that just isn’t Canadian.”

Leitch then brought the interview to a swift ending, saying she was getting hot in her hip-waders, and the bread was getting stale.