NHL Owners Confirm Rumours They Suck, And Have No Plans To Stop Sucking Before 2018 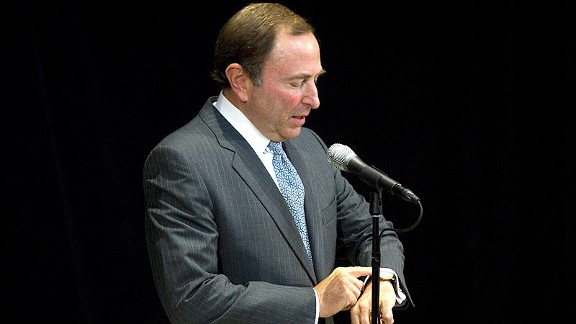 A new furrow has appeared on Gary Bettman’s forehead, right above the one he has from denying there is a link between concussions and CTE, and directly under the three he has from each time he has locked out players and fans from a season of the only thing that gets many Canadians out of bed in January. In a press conference held earlier today in some place where people in elaborately crafted suits don’t give two frozen shits about all the kids who live to see their stars play side-by-side in international competition; Bettman addressed his new crinkle.

“Yes, it is a deep one. No, I won’t botox. No, I’m not worried about walking on the streets. Not anymore than I was before making this announcement anyway, which is why I live in a constantly moving Uber somewhere north of Toronto, but south of Ottawa, and west of Montreal. No, not in Kingston. I’m not very popular there either.”

The announcement that Bettman was referring to is the unsurprisingly selfish and shortsighted plan to not have NHL players inspire and ignite entire nations; in a time when reasons to collectively cheer for anyone’s flag are scarce on the ground.

“Let me put it simply,” said NHL Player’s Association head Don Fehr. “There will be no NHL players in the 2018 Olympics.  And that is because those aren’t actually players out there sports fans, that is skating stock; and you aren’t fans, you are unwitting shareholders in a business whose trading bell rings every Saturday night, and that makes decisions based on dollars rather than any sense of the meaning of the game.”

The players were quick to provide opinions as well, though mostly off-the-record for fear of having their remote collars detonated. As one tall person with broad shoulders and a wicked wristshot said, “If plans were cars this would be an Escalade. That’s right. Fucking gross. And a piece of shit that was worth way less the moment you said ‘put it on my Amex, I’ll expense that bitch anyway.’ I think this just goes to show the bosses are for the bosses. And the rims, and the leather seats, and the tinted windows so you don’t have to make eye contact with the little people.”