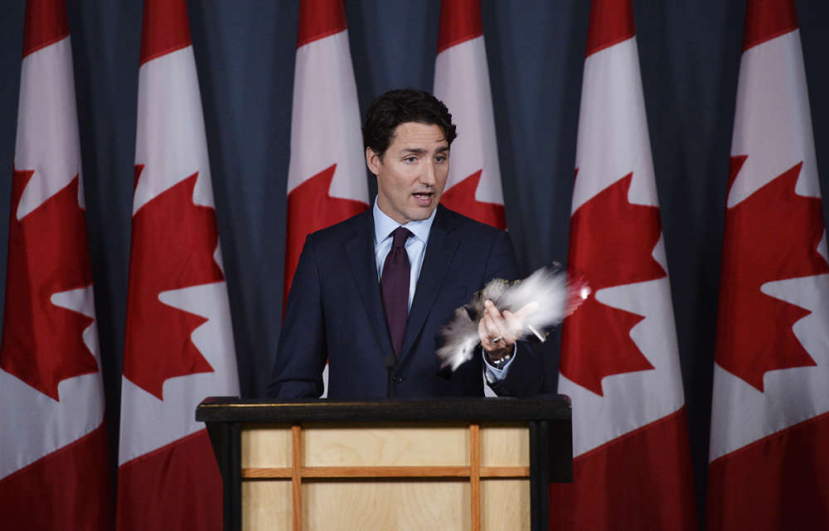 While waiting to embrace the current handshaker in chief of the world’s only remaining superpowergrip, Canadian Prime Minister Justin Trudeau was today spotted turning stones to dust in preparation for what many hope will signal the end of Donald Trump’s right hand as we know it.

“He’s been working out,” confirmed an aide who requested anonymity, but was sporting a full-arm and shoulder cast from a recent incident in which the PM gently brushed the assistant’s hand in passing, leaving it a fractured mess of ulnas, humeri and ligaments. “A lot.’

Following the meeting between Trudeau and Trump in February of this year, when the leaders squeezed each other’s hands as though mistaking them for the middle class, it’s been reported that both men have undertaken extensive training in the art of mixed martial handshakes.

“Trump likes to take it to the ground,” says MMH expert Georges St-Derriere, “That’s wher comfortable. Trudeau on the other hand – pun intended – is a smiling assassin. His favourite trick is to dazzle you with his teeth and then crush every bone in your body via the metacarpals. I give the match less than 10 seconds from the sound of the first shutter click. Trump should expect total liquefaction of his skeletal system.”

With many Republicans taking the afternoon off to hold handshake-watching parties, the tone in Washington today was boisterous. A drunken Mitch McConnell was seen ambling down the halls of congress asking if anyone knew if Trump had the maiming-by-foreign-dignitary rider on his insurance, and Bob Corker was reportedly offering to change the name of Charleston to Justinton if the Canadian PM managed to permanently destroy Trump’s tweeting hand.

“Look, no one wants to see the guy get hurt,’ Corker said as he settled into a couch in his offices to watch the main event, his tie pulled around onto his forehead Rambo-style, red warpaint splashed across his cheeks.

“We want total annihilation. Frankly I won’t be satisfied unless Trudeau squeezes that little flipper of Trump’s until the man actually does make America great again, and gets his ass out of our highest office.”