Saying it was a combination of instinct and a genetic predisposition to being amazing at everything he does whether planned or otherwise, Donald Trump today saved the president of the Philippines from the theoretical threat of the entire floor suddenly turning to hot lava.

“Gotta remain on your toes for that sort of thing,” the US president said as he cradled the still-shaking Duterte, whose strongman routine crumbled in the face of the horrifying hypothetical threat. “I have a daily regimen of jumping on couches and desks, preparing for just such an event,” Trump went on to declare in a statement that caused millions of people to entertain a not-unwelcome image of the president leaping around the Oval Office like a third-grader who found the red juice. Much of what he said was later walked back by Sarah Sanders.

“The president meant he occasionally carefully climbs onto furnishings, and only at appropriate times. I have never seen him jump. There is no jumping taking place. It is all very normal,” the weary looking press secretary said, before admitting that yes, she is now officially the fastest-aging human being on earth.

For his part, President Duterte was quick to laud his American counterpart.

“What if he hadn’t awkwardly crossed arms and looked like a total idiot? I could have been burnt alive by imaginary hot lava.” Regrouping, Duterte shook his shoulders and attempted to recompose himself into his usual format as a unredemptive asshole.

“That is no way to go. Unless you’re a scum-sucking drug dealer and then I will personally chop you up and feed you one limb at a time to Pele the Hawaiian goddess of fire.” 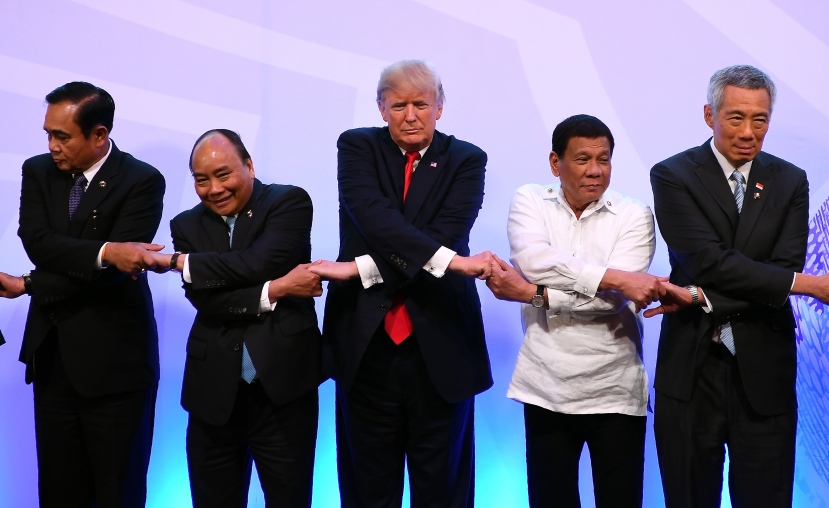 President Trump, unilaterally regretting everything that led to this moment.