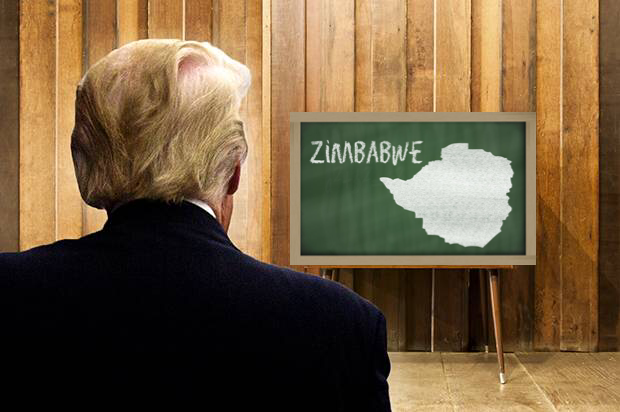 “The president is safe,” Mike Pence confirmed this morning, addressing reports that the secret service had rushed Donald Trump from the White House in the early hours, removing him to a safe location in the wake of an African nation making news and likely needing the president to attempt to say its name.

“His pronunciation is improving, and I’m happy to report he seems to be able to say ‘Harare’ unassisted. We have the best linguists in the nation working on him, and are hopeful that by mid-morning we will have successfully removed four extra syllables from his version of ‘Zimbabwe,'” The vice president said, before excusing himself to scream into a nearby velvet curtain.

With a military coup having deposed the Zimbabwe’s authoritarian leader – Robert Mugabe, whose last name many believe will prove physically impossible for Trump to say without oral surgery – many in the United States fear a repeat of the mass confusion that followed the president’s September escapade; when rather than read a fucking map he opted to just wing it whilst naming the member nations of the continent he was at that very moment standing upon. And in the process created Nambia.

“My inbox is still full,” admits Rex Tillerson. “I get between ten and fifteen thousand geography lectures a day at this point, which is down from a high of around a million maps a week being sent to me with NAMIBIA highlighted in bold letters with giant red arrows pointing to it. But its cool, I made a ‘forward’ rule that just sends them all to Donald.”

“Zimbopadoowop-awopbamboom?” Trump says cautiously, somewhere fourteen stories beneath a fake McDonald’s on the outskirts of DC, while the secret service look on in disbelief and John Kelly ponders honourable ways to take his own life. “Try again sir,” the chief of staff says absently, pulling out his phone to look up Japanese ceremonial swords on Amazon.

“Zim-zimmer-who-got-the-keys-to-my-beemer? Dodgers great Don Zimmer? World War Z? Canada? C’mon guys, I have to be getting close. Just let me get out there and make my speech. The world needs to know what I think about a despot being overthrown for using the guise of democracy to try to place his family in line to secede him. Ohhhhhhhh wait. Let’s think about this for a second.”

Kelly looks up from his sudden preoccupation with registering for Amazon Prime.

“Don’t worry sir, we aren’t going anywhere. You just keep on practicing. Say it with me. Zim-babonkadonk. You’ll get it.”