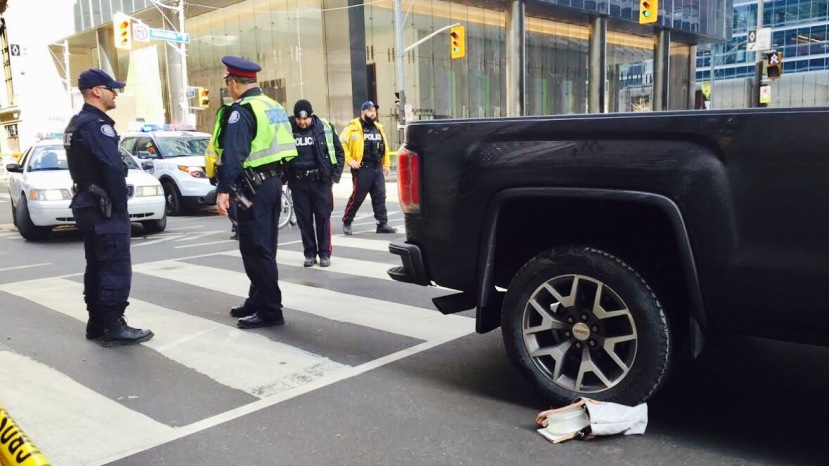 A pedestrian’s bag is believed to have scratched an alloy rim, and it may not be able to be polished out.

A particularly brutal morning rush hour in Toronto today has left two SUVs and one mid-sized vehicle in serious but stable condition in local auto body shops following collisions with human hazards, a visibly upset police representative reported in an emotional briefing shortly after 10 AM.

“It was pretty bad out there today,” Constable Kalik said somberly, avoiding eye contact as he discussed the heinous events of today’s commute, before quietly describing the dented fenders and broken glass that left Toronto’s streets looking like some sort of war is taking place between people and machines (that are driven by people).

“I’ve been on the force for twenty-three years, and nothing prepares you for dealing with scenes like what we had out there today. Smashed windscreens, side mirrors scattered dozens of meters away. Beautiful hi-lux paint scratched in multiple places. It’s just…I just… Jeezus man I’ve got cars of my own…” The constable said as he rapidly drew the briefing to a close, waving away the crushing press of microphones as he hurried off to hold his car close, and curse the inherent ephemerality of a steel chassis in a city that salts its streets.

The ‘Safe Streets For Cars And Trucks And Collectible Tanks’ commission (SSCTTC) was quick to issue a strongly worded demand to Toronto’s city council.

“When will enough be enough? When will City Council secure the safety of our vehicles? The notion that sentient bags of flesh and bones should be allowed to free-roam across roadways unattended is clearly an anachronism from a quaint time when  people needed their legs for conveyance, as opposed to now when you really only need one lower limb to reach the gas and brake pedals, and a decent stick will do really. We submit that this is the 21st century, officially the century of the car in the Chinese calendar. So again, for the 180th time this year, the SSCTTC asks council: how many more cars must be dinged, dented, and ultimately inconvenienced by colliding with human hazards that for reasons known only to themselves have abandoned their own auto-exoskeletons to flagrantly thumb their noses at death on the streets of this city? How many more families will be left without a car for two days while the panel-beaters hammer out the damage done by human heads knocking at speed into the hoods of their mini-vans? The war on cars by kamikaze people and their unlit offspring must be stopped. We thank you for your consideration, and wish a merry model-release to you all.”

Councillor Mammoliti (full disclosure: we fucking hate that guy) was quick to respond to the tragic events of the morning, calling in his response from the car he uses to get to his other car.

“My thoughts are with the families of these vehicles at this difficult time. I understand that the human hazards have all been formally charged with hit-and-lie-down-and-don’t-get-up violations, and I’m asking for the stiffest penalty possible despite the fact all five pedestrians involved in today’s events passed away at the various scenes. They will still be held accountable for not being able to perform a Fosbury Flop to avoid being struck while crossing with the light. Frankly if you don’t have a six-foot vertical leap, you shouldn’t be out there getting in the way. It’s that simple.”

For their part, Toronto Police Services have called in extra reinforcements for this afternoon’s rush, and are intending to blitz the downtown streets, ticketing any pedestrians unable to perform a triple salchow on demand.

“The carnal car carnage must stop. Human’s heal, sometimes, but a paint job is never the same after a touch up, you can really see the lines when you look against the light and often rust will eventually form around the repair. So take this as a warning, walkers of Toronto: your days are numbered. “