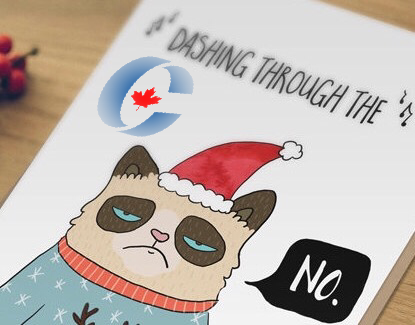 “Merry Christmas!” The CPC-issued seasonal cards wish their supporters before continuing breathlessly on, “Or it would be if it hadn’t been ruined by Liberal overspending, ethics breaches, an ice rink how dare they, and simple existence after we have repeatedly urged them to stop being a thing.”

The cards, which started arriving in the mailboxes of Conservative Party supporters last Monday, have on their front a photo of feline representation of Andrew Scheer making the best of the worst Christmas ever, including the time he had to work in the real world for a friend of his dad’s.

“Which was horrible and deeply scarring,” Scheer says, fighting back tears as he sits on his sofa in the dark not enjoying the festive season at all. “But I’ve carried the lessons from that time with me ever since, and used them to inspire my contributions to the CPC party platform. Namely that the Liberals are bad to the bone, and have irrevocably ruined Canada, Christmas, Hanukkah, life, Star Wars, and the multiverse if your god allows for that concept. Mine doesn’t. FYI Trudeau has no god, unless you also have no god in which case Trudeau is all about god and just won’t leave him alone. It’s a complicated worldview but just trust me it sucks..”

The cards, which can’t be opened due to an oddly-fitting administrative error which saw the complaining front being glued to the featureless back, concludes by urging Canadians to do the right thing and vote CPC in the next federal election.

“And in so doing, saving Christmas, our nation, your children, veterans, Canadian values, all the money, and ever having to worry about anything ever again. Best Wishes In The Coming Year That Is Already Ruined, The CPC.”