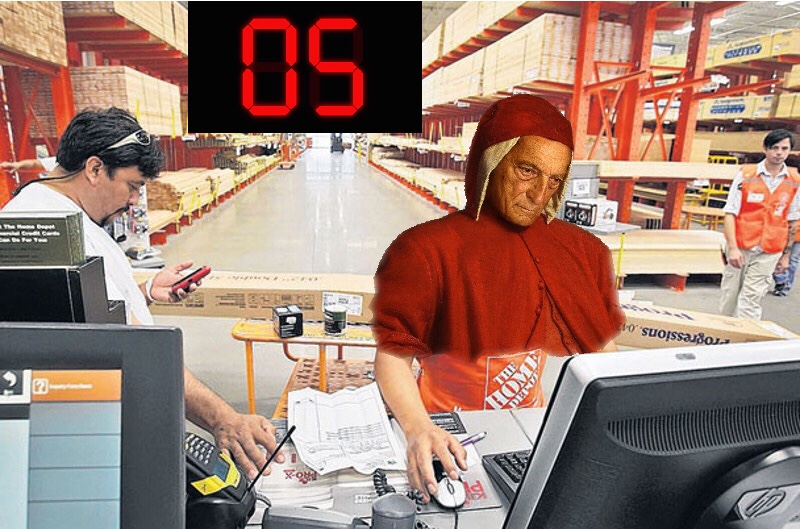 Customer service rep ‘Dante’. Says it’s his first day on the job and the computer seems to have frozen.

In an effort to improve transparency, Home Depot – North America’s largest distributor of beef jerky by square footage – has announced it will now allow customers to see which level of hell they are entering while they wait for customer service.

“Hi, my name is Virgil,” a friendly enough looking man says, adding in the same breath that he is an as-yet unpublished Roman poet and this is just his day job, before going on to explain that he’ll be our escort as we descend into the narrowing corridor of hell while trying to return an extension cord that refuses to conduct electricity; and a panic-bought bag of Sriracha beef jerky, purchased mostly out of sheer surprise at finding it sandwiched between the batteries and the portable fans.

“So just have a seat and keep an eye on that diabolically red display right there, okie doke?” The obscenely cheerful service rep says, adjusting his hellishly glowing orange shirt and smiling like Stephen King.

The new displays – added after a customer spontaneously combusted into a cloud of atomized frustration at having to wait three hours to return an item worth $4.27 (her last words were reportedly “it’s the goddamned principle of the thing”) – are expected to do absolutely nothing to stop the degradation of the modern consumer experience.

“Good news,” Virgil calls out from behind the sports section of his local newspaper, a hand emerging to point at the lurid digital counter. “We’re into the vestibule now. Note the latin disclaimer, which I will translate for you: Abandon all plans for the rest of your day, ye who enter here. Catchy huh?”

Asked why we can here the sounds of anguished screams coming from a back room, Virgil chuckles ruefully and shakes his head.

“Those are the people who lost their receipts. We call them the uncommitted. Aaaaaand here we are, the river Acheron, which you’ll have to cross to get to the returns desk proper. You might want to have a seat, the ferry only comes every other leap year and you just missed one. Too bad. Beef jerky?”