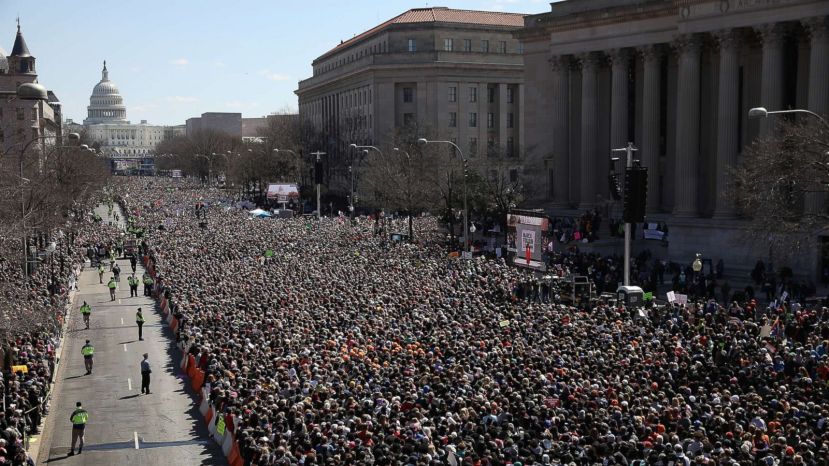 Young Americans lining up to vote in 2020.

In the wake of millions of young people massing in cities across America to demand a better solution to school shootings than arming class guinea pigs, the GOP has taken the message inherent in this upswell of public outrage to its logical conclusion.

“Clearly we’re going to have to raise the voting age,” said Paul Ryan, as he listened to the most powerful speech in Washington this year, delivered by an 18-year-old girl, and including a silence whose enormity will echo for generations.

Saying that their preference would also be to alter the electoral registers to only include white males who watch NASCAR, don’t like kneeling football players, own at least one box of hollow point bullets for recreational purposes, and frequently use the term ‘dagnabbit;’ the GOP wasted no time in making clear that their takeaway from the largest mobilization of teenagers in the history of the United States is one of consternation and grave concern. For their political futures.

“Where’s Trump?” Ryan was heard to say, as he counted heads on screen grabs taken from live news reports of the massive rallies being held across the United States.

“8th hole,” said an aide, checking with a contact in the secret service. “He just double-bogeyed, so he should be in a good mood. Do we need him to make a statement?”

“God no,” said Ryan, writing down a figure and shaking his head worriedly. “We need him not to.”

With polls showing 100% of Americans don’t want kids to be shot at school, the Republicans face a steep uphill climb to November’s by-elections, as many of their members continue to receive funds from the NRA – whose motives they do not question, while at the same time openly wondering what all these kids asking not to be shot at are really after.

“It’s like they want substantial change or something,” says Senate Majority Leader Mitch McConnell, as he squinted at a television, trying to work out how many of the marchers would be able to vote before he could retire. “Don’t they know that’s not how this works? How high can we raise the voting age and not make it look suspicious? Good. Add ten years on top of that and get the amendment in front of Trump by Monday. We can’t have these kids out there inspiring everyone, and making the world think this nation has a bright future. That just won’t do. Dagnabbit.”

Tagged as: Gun Control, March For Our Lives, NRA, Satire