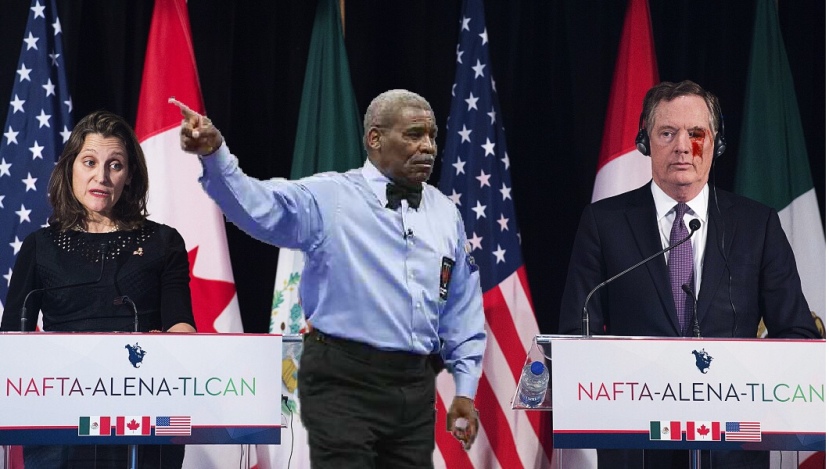 Billed as the Rumble Because Of The Grumble, the greatest meeting of North American heavyweight trade titans since Mulroney Vs. Bush in the early 90’s, was halted in the 8th round last night when a nasty cut opened above the U.S. trade representative’s right eye, following an inadvertent headbutt from Chrystia Freeland as the pair came out of yet another lock in the corner.

The early stoppage provided Freeland, a fiery battler who the Canadians call The Give ‘Er From Peace River, the decision on points. All three judges scored the fight in Freeland’s favour, after she knocked Lighthizer down repeatedly during the gruelling contest, at one point taunting him by waving a softwood two-by-four over her head and asking him if he wanted to go back to arbitration.

“Those are the rules,” said a clearly disappointed Robert Lighthizer, referring to the premature ending of the meeting, promising a rematch will be held as soon as he could staunch the loss of U.S. influence and respect that continued to pour out of his brow. “We all know it coming in. As Joe Frazier once said: NAFTA negotiations are the only sport in which you get your brain shook, your money took, and your name in the undertaker book.”

Predictably, Lighthizer’s flamboyant promoter, Don Trump, was less sanguine about the defeat. With his trademark hair in a gravity-defying configuration, he unleashed a post-match tirade.

“If the Canadians keep mugging us like this I’m going to raise the tariffs on haymakers. And excellence in general. Like a 1000%. NAFTA is a blood sport, we saw that out there today. The problem is the wrong side was bleeding. SOMEBODY FIX THAT.”

While keen to move on from the defeat, Lighthizer did indicate that next time around he wouldn’t go so easily. The Georgetown-trained fighter revealed he will be getting a facial tattoo. and is through with being Mr. Nice Guy.

“When we next meet up I plan on going straight for the Canadian auto industry. That should stand them up. Everyone has a plan until they get punched in the mouth.”

Reached for comment Freeland just cracked her knuckles and smiled.