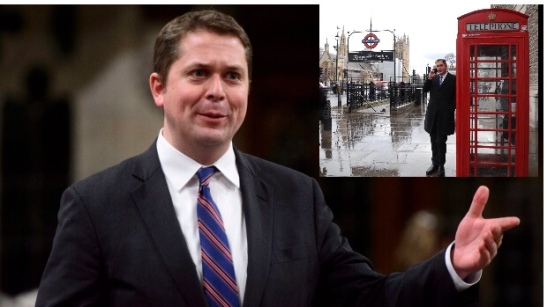 A look of panic passed through the House of Commons today, as Andrew Scheer took advantage of Prime Minister’s Trudeau’s absence – as the PM attends a meeting of Commonwealth leaders in England – to rise and ask the Speaker if he could show a few highlights from his own recent trip to London. “The one in the United Kingdom.”

Before the Speaker could answer, and over bipartisan groans and protests, Scheer pulled out a clicker, nodded to Candice Bergen to hit the lights, and began what would prove to be an 8-hour slide show.

“So here I am at Pearson airport, getting ready for the flight that takes you across an entire ocean. The plane was fun, I had juice. They didn’t have my favourite movie though, so points off British Airways there. Who doesn’t have Rudy? I guess that’s why the empire failed. Hey Candice, get back here, I’m about to show the entire video of my trip from Heathrow to the hotel in the taxi. They call them CABS. And they do not take Interac.”

Politically, the slide show proved even more effective than the Conservative’s recent  filibuster, in which they attempted to force Prime Minister Trudeau to tell them which conditioner works best on springy hair, and as a general excuse to not wear ties.

“We basically conceded on every point on their agenda,” said Liberal MP Ralph Goodale, charged with holding down the fort while Trudeau is away. “Anything to make it stop. I think at one point, somewhere between hearing about Scheer’s dinner at The Outback, and the fortieth photo of a pigeon, I might have crossed the aisle. Luckily everyone was asleep by then and Andrew was deep into a description of which seat is best on a double-decker bus, so hopefully nobody noticed.”

The unprecedented display in the House finally came to an end when someone began circulating a phone displaying photos of Trudeau with the Queen. Some Conservatives, including an irate Scheer – upset at being interrupted – said that this was just more evidence of the PM being met by low-level officials. When asked if he’d had the opportunity to see the monarch, Scheer admitted he had not, but said that was only because the lines into Buckingham palace were too long.