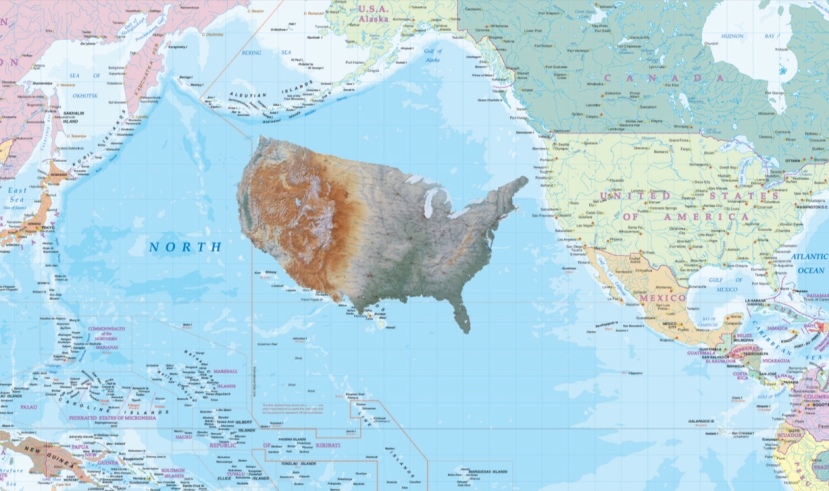 Remerica. Land of the free, home of the brave enough to try again.

In a development as impossibly perfect as it is unexpected, Hawaii’s Kilauea volcano has undergone an eruption so vast it has created an entire new landmass the exact size and shape of the continental United States. And not a moment too soon.

“We will call it ‘Remerica,'” said the newly-elected President of Remerica, Barack Obama, who was immediately chosen by the people of Hawaii to be the leader of the “just suddenly there” apparition of hope and promise.

“Partly because it will be a redo of America,” Obama said, in that well-spaced, multi-syllabic, serious, statesman-like way that many people have missed so very much in the seeming decades since he was the president; in the same way that a record player that has been forced to play pancakes misses vinyl.

“And partly to remind us to not make the same mistakes again. First up: no slaves.”

While geologists are at a loss to explain how this event is even possible, the general consensus is it really doesn’t matter.

“We’ll just take it,” said the hundreds of millions of people who are currently chafing under the hammy thighs of Donald Trump’s porcine leadership. “As soon as that newly-formed volcanic rock is cool enough to not melt the rubber right off the soles of our shoes, we are so, so, so there.”

“In a crazy coincidence, the landmass is exactly the same dimensions as the United States, so really everyone can just take up their positions as before. Assuming, that is, that they meet our qualifications for immigration. Which simply consist of agreeing that this is a land for everyone who agrees this is a land for everyone. Anyone who thinks they’re the only wave of new inhabitants that matter, and that everyone who comes after will have to beg to be allowed in, well, they can just keep their ass back in the old America and see how that works out for them. That, and – just off the top of my head – strict gun control, freedom to practice all religions and world views, and total embracement of the many ways human beings have to love and be loved; should weed out the rest of the assholes.”

Obama pauses and takes a breath. It’s been a busy day. The tsunamis caused by the unprecedented displacement of multiple cubic country’s-worth of ocean water, are only just subsiding around the Pacific Rim. The new ground remains hot to the touch, and the work needed to transform the still-steaming stone into a nation is daunting. The president looks out over the bare sinews, bones, cartilagifications, of a land to be. He pictures green fields and flowing rivers. More than that, he pictures peace; and life without Trump hotels, or Mitch Mconnell, or Ted Fucking Nugent.

“But yeah. I think we can be happy here. And with that in mind, as my first order of business, I’m ceding control to Michelle. Remerica. Fuck yeah.”