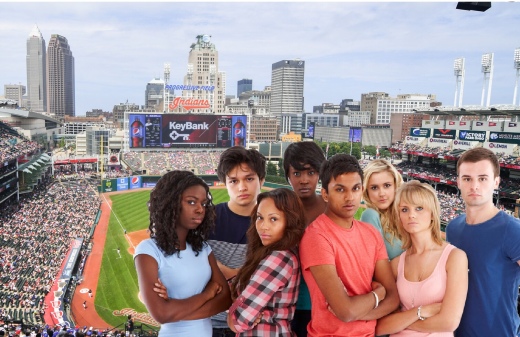 As a salute to the nation’s brave students currently on active duty in schools across the country, tributes were held in baseball stadiums throughout America this past weekend, under the theme of “Support Our Junior Troops.”

The league-wide display of backing for the country’s self-sacrificing scholars has become an annual tradition in recent years, with teams donning school-themed uniforms and clear backpacks for the day, and umpires carrying ceremonial rulers in a nod to the many teachers who risk their lives to educate the next generation.

“So proud,” said one father, watching his young son accept a prolonged standing ovation from the citizens of a nation that seems to have decided that the right to bear arms comes at a cost that – while terrible, and unnecessary – is also somehow unavoidable.

“Sure, I’m scared as hell every time he gets on that big, yellow, military transport in the mornings, and heads back out on active duty. And every text, phone call, or breaking news story I see during the day I think, ‘Is this it? Is this the one? Tell me Joey’s ok. Just be ok Joey.’ But I understand that this is the hard cost of living in a democratic nation that bends to business interests, and I really just couldn’t be prouder.”

Low-flying air ambulances flew overhead in formation as the NRA’s Oliver North delivered the first pitch in Houston, later suggesting that a lack of ability to throw strikes is one of the reasons kids get shot in schools. “Location is key when taking down a shooter,” he said, noting that his lob made it over the plate. “I think if kids stockpiled baseballs in their classrooms, and were able to effectively deliver a decent fastball in active shooter scenarios, that would offer a real chance of stopping the majority of these otherwise unavoidable situations.”

Stepping off the field after being honoured in Cleveland, 14-year-old Jenny Nelson (“but my platoon just calls me Tug”) of Akron, Ohio, takes a question about what it’s like to attend a baseball game on the one day, and then have to head straight back out on patrol the next.

“I’m just proud to be a member of our student forces,” she said, looking resplendent in her school uniform, decorated with safety-pinned buttons for bravery. “I won’t lie though, I’m looking forward to knocking back a few celebratory lemonades in my backyard come the end of June, safe for two months furlough before heading back out for my sophomore campaign.”