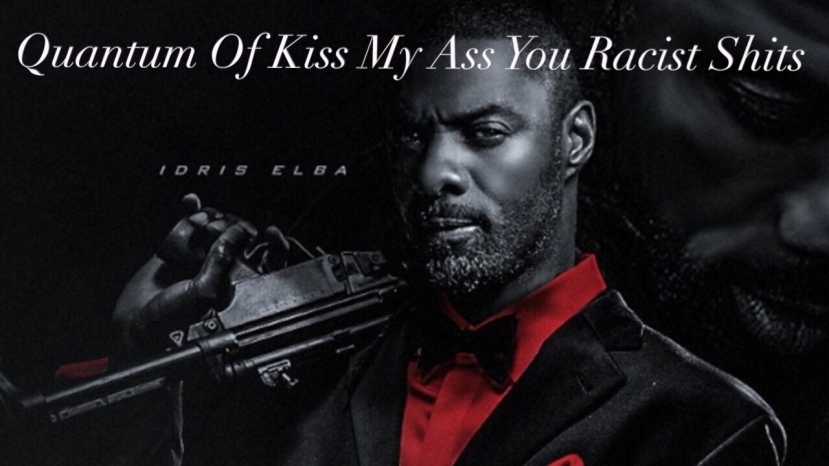 Due out in theatres not soon enough.

“Bit of a mouthful isn’t it?” a suave man wearing a suit the way most people wear yoga attire says, slipping into the seat opposite a reporter in a bustling London cafe for an interview on his soon-to-be-announced role as James ‘Believe-I’ll-Just-Die-Another-Day-If-That’s-Alright-Mate’ Bond.

“But a touch easier to get past the censors than ‘Casino Come Here And Say That You Fucking Wankers,’ don’t you think?” he adds, winking and taking a sip of his coffee.

Widely viewed by everyone not blinded by an irrational hatred for people of a colour that rhymes with ‘unnecessary flak’ as being among the very best actors to have graced this generation, Mr. Elba admits that he does indeed hold more awards than white supremacists carry misrepresentations of history.

“Probably in the thousands now. It is getting a little hard to keep track,” Idris says, attempting (unsuccessfully) to manually override his natural magnetism, as his presence in the East London eatery quickly causes fire-code-violating sized crowds to emerge from the woodwork. “And growing by the year.”

Proven, pursued, and in his prime, it seems unlikely that anyone could possibly object to Mr. Elba taking the wheel of Bond’s Aston Martin. And yet.

“Not what Ian Fleming intended when he first created the Bond character,” said all the racist shits Twitter keeps around to maintain its market cap. None of whom have yet to come up with a convincing explanation for why, then, is it acceptable to portray Jesus as a white man.

“In the film there are a number of rampant chase scenes in which racism follows me well into the 21st century,” the star of every production he’s ever been in explains, diagramming how bigotry still exists by pouring some of his coffee on the table and then waiting for it to evaporate. “All of which I win by kicking the shit out of the villains. Which is approximately ten times more cathartic than it sounds. And makes for great viewing. In one scene I throw a villain who looks an awful lot like Richard Spencer off the top of a tall building, and he screams “Free speeeeeeeeeeeeech” all the way to the ground. Then I take the elevator downstairs, collect his remains, go back up, and do it again. Great fun.”

Critics are already calling that scene alone worth the price of admission, and many who haven’t even seen the movie are saying that Quantum Of Kiss My Ass You Racist Shits is a near-lock to become the first James Bond film to win the Academy Award for Best Picture/Feature Length Fuck You.

“But it’s not about the awards,” Elba concludes, casually mopping up the spilled coffee.  “It’s about snapping necks, cashing checks, and getting all hands on deck to defeat a societal scourge that has surely done enough damage. So if a black man being James Bond bothers someone, well then let this serve as notice that they are about to have their worldview shaken. Not stirred.”