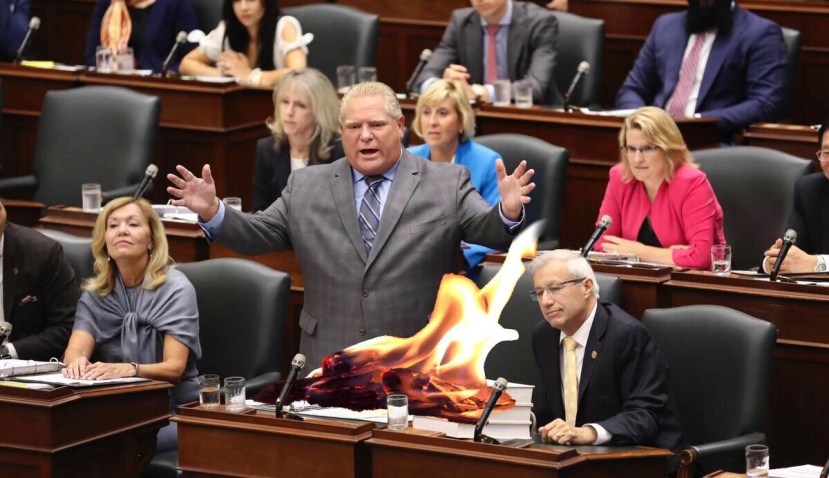 Saying that by 2020 over half of the province’s energy needs could be met by burning the “horribly restrictive laws that the people of Ontario didn’t vote for,” Premier Doug Ford became the first person to use a flame-thrower in a Canadian legislative assembly today, when in one hot blaze the Ontario PCs cancelled the Green Energy Act and unveiled the new Clean Law Burning Act.

“Solar power, wind power, thermal power, they all come at a price,” said Ford, donning a protective apron and opening the valve on his portable fire-starter. “But not so with clean burning laws. They are by far the best way to both deregulate, start an energy-rich conflagration, and trample the rights of everyone who dared to not vote for Douglas Robert Ford.”

With few byproducts apart from public outrage and precipitous drops in approval ratings, many in Canadian Conservative circles have begun looking towards burning laws as the only way forward for a country with vast quantities of naturally occurring justice.

“Who needs subsidized solar panels and wind turbines, when we can have white-hot furnaces burning our rights, 24/7?” asked Ontario’s Minister of Energy, Greg Rickford, from down in the Queen’s Park loading docks where he was helping to unload trucks full of legal texts destined to fuel the bright, unfettered future dawning in this province.

“You might think this is an onerous overreach by our government now, but trust me, when your house is sitting at 25 degrees in January for the low price of your rights, you’ll be thanking us. And well, if you aren’t, we won’t have to listen as we’ll have already burned your entitlement to free speech. Booyah. That’s right, I said booyah.”

While today’s announcement was mostly ceremonial – as well as acrid, and eventually involving a complete evacuation of the entire building – the Ontario PCs have said that they are looking at promoting the new legislation-incinerating technology through a variety of means.

“We’re talking subsidies for law-burning stoves in every Ontario home,” Premier Ford said through an oxygen mask while being treated for smoke inhalation after his announcement took an unplanned turn. “Special lanes in the cities for taxis that convert to running on natural code. Charge-dropping stations on every corner. The flume’s the limit.”

Energy experts were quick to say that while Ford’s plan appears insane on paper, it is also insane.

“Pivoting away from our future to destroy the decrees of the past seems almost willfully stupid,” said energy consultant Bob Brisco, from the firm Earth, Wind, Not Fire. “And, as such, is wholly unsurprising for this political party. If conservative voters wanted to burn something to save this province, they should have skipped the Green Energy Act and instead started with their ballots.”