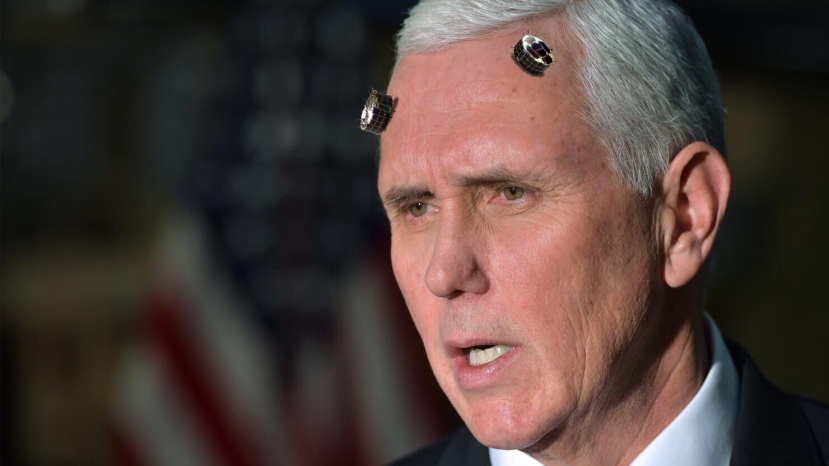 The Penceroid is believed to be made almost entirely of things he was told to say.

A shout of triumph went up in Japan’s Mission Control Centre early Sunday morning, as the Asian nation celebrated successfully landing two rovers on the surface of U.S. Vice President Mike Pence, a first in the storied history of emotionless automaton exploration.

Deployed from a probe hovering at a low altitude above the VP’s hairline, the two rovers are believed to be the first foreign objects to have landed on Pence’s face since Donald Trump’s ass paid a touch-and-go visit early last week.

“We only gave it a 50/50 chance of success,” said the mission’s co-ordinator, Dr. Haruto Yamamoto, “As there was no way of knowing in advance if the landing site would be sweating, covered by a hat, or midway through a facial. Thankfully it was all clear, and we were able to make our approach while the Penceroid was engaged in a lengthy statement regarding the sinfulness of smiling with your eyes.”

The rovers are designed to hop along the vice president’s beige exterior, and will be conducting a battery of tests and scans in an attempt to determine the composition of Mr. Pence.

“Competing theories currently exist on that subject,” admits Dr. Yamamoto. “While early scans indicate that Pence is almost entirely hollow, and that most of his exterior is a fragile latticework of brittle masculinity and other people’s opinions, a few of my colleagues think that he is actually a person. Which, I have to say, is a pretty outlandish theory, for which there is little-to-no evidence.”

The remote vehicles will also continue the search for signs of intelligence in the upper Trump administration.

“But we’re not holding our breath there,” says Yamamoto, adding that early images from the rovers show a cold, airless environment, with a worldview that appears to have changed little in over two thousand years.”