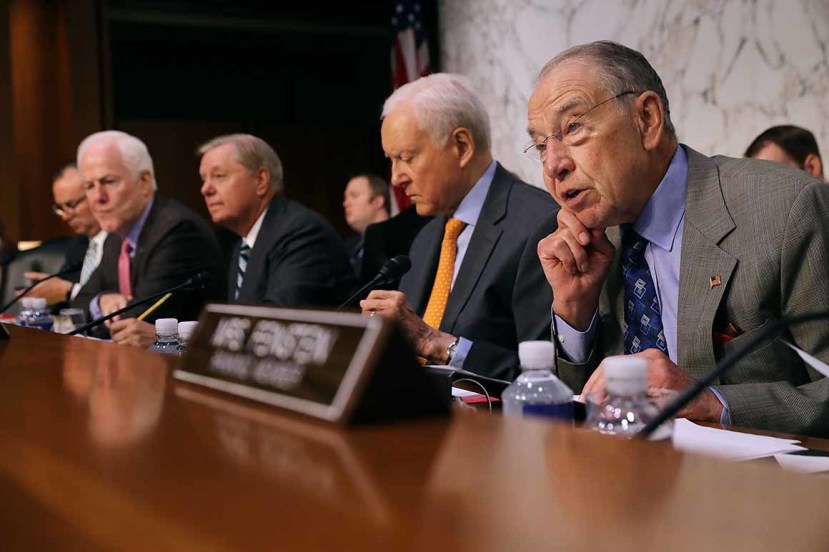 Senator Chuck Grassley, asking what the weather was like in 1842.

The Republican senators to whom the difficult task of deciding which century the United States of America should inhabit in the year 2018, met today in a closed-doors, land-before-this-time, no-girls-allowed meeting earlier. And, with over 60 centuries to choose from since God put a white guy in charge of the animals and his rib-thieving wife, the session was a lengthy one.

“Let’s hear the options again,” said Chuck Grassley, current chairman of the Senate Judiciary Committee, also commonly referred to as the ‘Century Selection Club.’ To his right Senator Orrin Hatch cleared his throat and looked down at his notes.

“Okay so, on the one hand, we can go right on back to living in the middle of last century. Big cars, bacon on burgers on bacon, a movie cost fifty cents, teachers could smack a kid, no such thing as a hippie, no environmental considerations; and the dangers of smoking, lead, and asbestos all remained largely unknown or mostly ignored.”

Grassley ate a handful of oats, and chewed thoughtfully.

“What was the downside?”

Hatch scanned his notes again. He flipped a page. He flipped another page. Finally an assistant passed him a note.

“Right. Here we are. This says, “Legal segregation still existed in many states, and women in general were expected to stay home and look after the children.”

“He asked what the downside was,” said Senator Ted Cruz, pausing in his systematic destruction of a cob of corn.

Grassley’s flicked an ear towards the Senator from Texas, before settling back in his chair. He steepled his hands. He asked for more oats. They came. He ate them as might a horse; all lips, no talking. Finally he asked the senator from Utah to rehash centuries 15-19.

“Well, we’ve got plague and pestilence but a populace easily controlled by religion. Then some idiot teaches the commoners to read, followed by a mad scramble for land, followed by more mad scrambling for land. Some wars, revolutions, the founding of America (how fun would that be?), industrialization, steam travel, baseball, trains, phones, lightbulbs. But also: smallpox, diphtheria, yellow fever, tuberculosis, cholera and dozens of other diseases are still major killers.

“The women?” Grassley asked, pawing at his forehead.

“All good options,” the chairman said, to widespread murmurs of agreement. “Ok, that catches us up from Genesis to now. Are we missing one? It feels like we’re missing one.” An aide whispered in his ear.

“Oh yes. The one we’re in. Better at least consider that possibility Orrin. Let’s hear it.”

Orrin adjusted his glasses and made a face. “Not a whole lot going for it, I have to say. The planet is getting mighty hot, a man can’t just drill any old place he wants, and everywhere you turn people are telling you that justice is actually, literally blind. When we all know she’s just wearing a sleeping mask. One that symbolizes she likes naps, particularly when it’s a good old boy on trial amirite? Iamrite.”

“Lotta downsides there senator. Give us a reason to not send this whole grand experiment back to when seat belts were an extra, or better yet to a longboat on the Delaware.”

Hatch shakes his head. He rifles through his research. He comes up empty. There’s an awkward silence. Once again a note is passed to him over his shoulder.

“No viagra,” he reads aloud. Sage nods spread around the room and there is much muttering and whispering about it not really being that hot, and offshore banking has kept the effective taxes of the wealthy fairly manageable.

“Alright,” shouts Grassley, getting to all four feet. “I for one am ready to hit the hay. Let’s have a vote.”

Options ring out in the wood-panelled room. Hands raise, calculating glances dart, passionate ayes are said. At the end of it, Senator Grassley looks down at the results.

“Gentlemen, we have a draw. It’s a tie between the 18th and 20th centuries. Amazing. It really is remarkable progress to see this party enter the A.D.’s, I have to say. Okay, let’s meet here in a week to decide just how many dozens of decades we’d like to go back. And remember, think hard men. It’s our God-given duty.”