No Refund For Canadian GoFundMe Hedge Donors, But Whole Lot Of Satisfaction 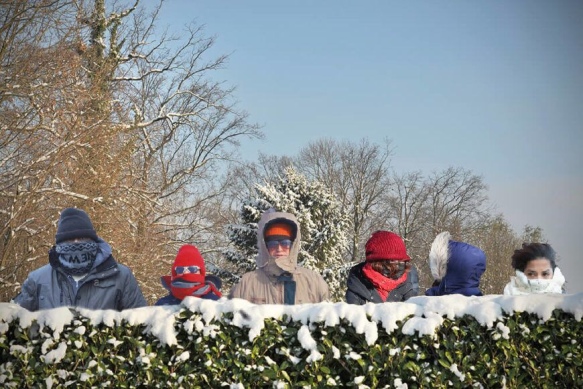 A number of Canadian hedge funders, inspecting the results of their donations.

In a statement released today by the Canadian Border Hedge And Handler’s Association (CBHAHA), the agency has made it clear that the millions of Canadians who contributed to the successful GoFundMe campaign to sponsor a tasteful border shrubbery, will not be getting their money back.

“But boy are they going to like where we put it,” says Tom Candy, the initiator of the campaign, rubbing his heavily-calloused palms together in the cold January air, at a remote location along the Canadian-American border. He adds that so far no one has actually asked for a refund, as he hefts a pickaxe, and swings it high over head in the hard, mid-winter’s light, singing as the metal strikes the cold earth.

“Sundown in the Paris of the prairies. Hedge kings have all their treasures buried.”

And then, bending over the opened, frozen earth, he places a small sapling in the frozen earth, sprinkles a few of Trump’s tweets around the base, and tamps the cold clods of rich alluvial soil back into place.

Candy is quick to point out that there are a number of crucial differences between the crowdfunding campaign for the American border wall – which officially failed on Friday after only raising 2% of their stated goal – and the Canadian privacy hedge fundraiser, which received $6 billion in less than two hours.

“Apart from the obvious fact that we succeeded, and they’re giving out refunds, it needs to be said that our border bush isn’t intended to keep any desperate souls out. Not like that wall down south, the main purpose of which appears to be providing a lasting marker of how far backwards our supposedly advanced society travelled at the beginning of the 21st century. No, our hedge isn’t meant to be a people-stopper. It’s more of a windbreak; against a particularly cold, scouring, and lifeless breeze that has been blowing hard out of the south of late.”

The head hedge funder pauses then, and looks around the land, eponymously named for the Saskatchewan River that runs through it – which in Cree means ‘swiftly flowing water,’ and in English denotes ‘the place with the long road signs.’

“All this used to be under an inland sea. Same with the majority of what we now call the United States. And it may well be underwater again, in the not-so-distant future. So you know what that means don’t you?” Candy raises his pickaxe from the icy ground.

“It means there’s no time to waste being conned and lied to by some failed fucking reality TV star with a hateful heart. Certainly not up here, where winter makes short work of fools. So kindly step aside there friend. We’ve got planting to do.”