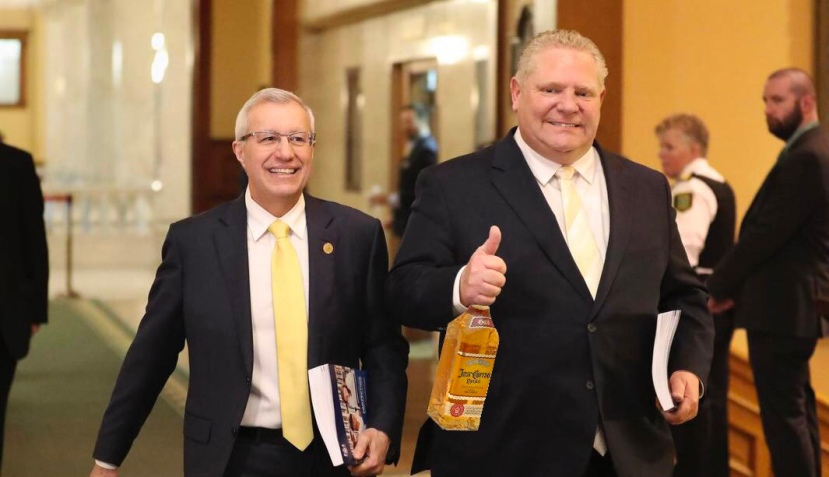 PARTY TOWN – In a budget that will be remembered for Doug Ford’s making good on the key promise he made to the voters of Ontario during last year’s campaign to not be Kathleen Wynne, the Ontario PCs today announced that subsidized tequila shots will soon be available for all children currently in after-school care.

“No, we’re not cutting the deficit,” said Finance Minister Vic Fedeli, to a scrum of reporters at Queen’s Park, shortly after delivering this PC government’s first annual budget – which he punctuated by beer-bonging a tallboy of Lakeport.

“Haha no, you big jokers, we aren’t lowering spending either,” he added, as his too-exuberant laughter echoed off the foyer ceiling, and reporters exchanged looks of WTF.  “Well yes, of course that means the debt is still going to go up, despite our evilsating … evervisitating … sorry … eviscerating cuts to the education budget and key social programs. But jeez guys, you’re just glossing right over the fact that we’re going to make beer come out of the fire hydrants! Because booze! Moscow Mules before schools, amirite?”

The focus on drinking instead of thinking put Ford – who ran on a complex platform of breathing through his mouth and blinking at the same time – in the position of having to explain his ‘pour a little whiskey on that’ budget to his supporters, after they expressed dismay at his fielding the largest budget in provincial history. Yet the premier appeared unconcerned with having done precisely what he had warned the Liberals would do – but with added pain – when he addressed the media later in the afternoon, doubling down on extremely short sentences and meaningless slogans.

“Folks, folks, folks. Subways. Beer. Early. Often. And everywhere. A Place To Grow. A Place To Sleep It Off. Vans with leather seats. Drinking in parking lots. Fewer teachers. More liquor stores. Need I say more? No. But I will. So let me just finish by saying: One tequila. Two tequila. Three tequila? Ford more years.”