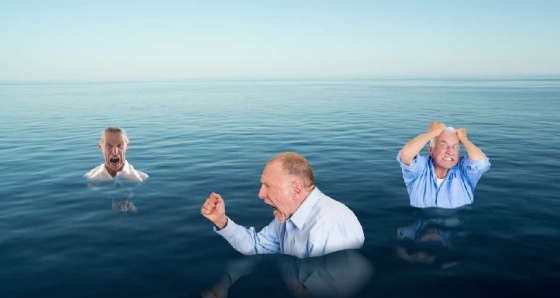 Lake Petrolhead is already threatening to flood its pants.

Like a tsunami of fetid masculinity washing over the beachhead of bare minimum progress, old man rage levels crested at record highs today, following the news that Greta Thunberg has been named Time magazine’s Person (Who Owned All Of The Blatantly Backwards Asses) Of The Year.

“Other than coalescing support around a movement to save the planet, then backing it up by sailing across an ocean twice, initiating rallies of astonishing size and fervour in most of the world’s largest cities, and inspiring an entire generation of young people to take action on climate change, what on Earth has that young lady done to deserve Person of the Year?” screamed an extremely triggered guy, as he rapidly flooded his own basement with ineffective anger.

“Not like Trump, who received the honour for his incredible humanitarian work to save the lap dances, and signing a bill to protect 10,000 hectares of bacon double-cheeseburgers in perpetuity. Now there’s a leader.”

Around the world, the effects of the meltdown of misdirected fury were immediately visible, as people grappled with the audacity of a young person who insisted on wanting a whole entire future.

In Canada, online comment sections were suddenly swamped with men railing against being told what to do by a teenager. This from the same group of people who had also made it abundantly clear that they would not be accepting warnings or advice from leading scientists, experts, leaders, or anyone who has been outside with any regularity in the last 20 years.

In the United States entire communities were inundated with the unasked for opinions of actual human dinosaurs; ones who had the odd, sad distinction of wilfully hastening their own extinction.

And in Australia, even as rampant forest fires reduced the air quality levels in Sydney to that of Uranus, many proud blokes took to mansplaining how Greta Thunberg *cough* doesn’t know shit *cough, cough* about the science behind all of this climate change stuff *collapses in the middle of the street*.

For her part, Greta Thunberg remained her typical focussed self, saying that she would likely decline the magazine’s award, “As there is now quite literally no Time left.”